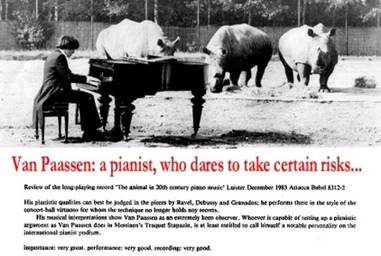 Marius van Paassen made his debut in the large hall of the Concertgebouw in Amsterdam with Tchaikovsky's first piano concerto in 1982. During that tour the public invariably applauded after the first movement. It is very unusual to applaud between movements in classical music, but this says something about the impact his playing made. He appeared frequently as a soloist with symphony orchestras and radio orchestras in the Netherlands and abroad in the years following his debut. He played in all the major halls in the Netherlands. World Wild Life Fund carried on a campaign using his first solo album, "The animal in 20th century piano music." This was an occasion for Van Paassen to be front page news.The CD was broadcast by many radio stations. He was invited to festivals in France, Rumania and the Netherlands. He participated several times in theater productions by the Dutch composer Louis Andriessen.

He stopped performing (2014) for the time being due to a medical condition in his  right hand.

Marius van Paassen (1952) grew up in a musical family. At a very young age he already was interested in making his own music, which resulted in a small number of compositions for piano, the instrument he chose to master. Improvisation was a favorite pastime. He started playing his own compositions on recitals in 1988. Dutch radio recorded some of these concerts. In November 2013 the record company Attacca productions released W O N D E R his latest album, a double-CD with a CD-Rom with the sheet music. Compositions around the theme ‘wonder’. Earlier (1999) Attacca released a CD with compositions by Van Paassen, 'The Amsterdam recital', a live recording of a recital in Amsterdam.  He performed his compositions in regular concert halls in the Netherlands like the concertgebouw, the Doelen, Diligentia and special locations like the Stedelijk Museum in Amsterdam and Smart Project Place.

One of the projects in his professional life was the project Anton Rubinstein, which started in 1981. Van Paassen tried not only to accomplish a revaluation of the Russian composer Anton Rubinstein (1829 - 1894), but also a return to a more authentic 19th century style of playing the piano. This resulted in two CD's, radio performances and Rubinstein's piano concertos and chamber-music and solo recitals in a number of European countries (Russia, Germany, France, Italy, Rumania and Sweden, The Netherlands). In 1994, 100 years after Rubinstein's death, Van Paassen gave a master class in St Petersburg (Russia) at the conservatory founded by Rubinstein. In 1996 Van Paassen had the honour to perform parts of "Le Bal' opus 14 by Anton Rubinstein at the inauguration of the old, renovated House of Parliament. Several years his performance of Rubinstein's variations on Yankee Doodle was broadcast on FM radio in the USA on the 4th of July.