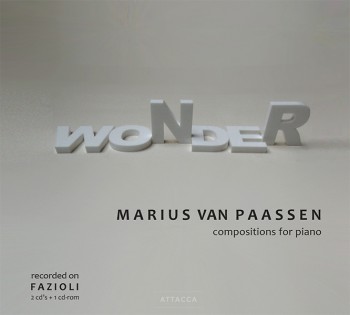 Compositions on the theme wonder.

Wonder is the beginning of wisdom,

The music on this album tries to reach that state of mind.

The CD contains also four dances, which act as intermezzo’s.

Two CD’s and one CD-Rom with the sheet music.

7   Laurel and Hardy in Chernobyl

Bird in a cage in the forest

To hunt, to be hunted

Wonder is the beginning of wisdom, the Greek philosopher Socrates said. Wonder: not yet understood, but wanting to understand. The music on this double CD, especially the pieces “I wonder ...” tries to reach that state of mind. Along the narrow slit of the present, it offers the listener sometimes strange, sometimes seemingly logical tissues in time.

CD 1 contains four Dances, acting as interludes between the other compositions.

Time spaces, is actually the perfect description of a piece of music. In this special case, the listener enters successive musical areas, chiselled in time, each with its own characteristics.

In memory of the victims of the nuclear disaster in Chernobyl: Laurel and Hardy in Chernobyl. Chernobyl: not a place for comedians. Nuclear power is risky. What can we do with the waste, which stays poisonous, the next tens of thousands of years?

The Sonata on freedom is in fact about the lack of freedom of the individual. His situation is somewhat reminiscent of a bird in a cage in the forest, the title of the middle part of the second part, ‘to hunt, to be hunted’. We hear there bars of a cage and bird signals. These same elements also appear in the other parts, so that the characteristic coherence arises of a sonata. Philosopher Carl Popper wrote in his famous book, The open society and its enemies: “I do not wish to live at the mercy of anybody who has larger fists or bigger guns. I must give up my ‘freedom’ to attack, if I want the state to support defence against any attack. Thus I demand that the state must limit the freedom of the citizens as equally as possible, and not beyond what is necessary for achieving an equal limitation of freedom.”

Three pieces of time. Everything is temporary, even the universe, as many astronomers think. Not a cheerful thought. Yet temporality can also be a blessing when, for instance, suffering ends. In ‘to interrupt’ the melody attempts to interrupt the ruthless advancing of time. An unequal struggle. In ‘standstill’ one may cherish the illusion to be free for a while from the ever-ticking clock.

I use this pedal quite often in my compositions. It enables the player to keep the sound of some tones while playing other notes. It is also a means to attain acoustic effects by silently press down cords or clusters and then play staccato notes which will have a spatial resonance as happens in the piece Laurel and Hardy in Chernobyl.